Well, at the moment we certainly look capable of doing that.

Don't completely ignore Brentford in the middle of it.

I think it is Norwich to go up and one from us, Bournemouth, Watford and Brentford. For the three that don't go it is the lottery of the play offs.

Been running this place since 2001, still gives me a headache now!

Take a point. They score a lot of goals generally. Maybe they’ve dried up.

Win and draw in every two games and we’re up


Well, at the moment we certainly look capable of doing that.

Don't completely ignore Brentford in the middle of it.

I think it is Norwich to go up and one from us, Bournemouth, Watford and Brentford. For the three that don't go it is the lottery of the play offs.

definitely wont ignore them, i think second place will go down to the last game or two

Great result. The team has a hell of a good spirit and really look like a unit. All credit to Cooper. Freddie was superb tonight - Neuer Mark 2!

Fair play to Barnsley’s manager, not saying too much about the offside for Lowe’s goal.

He’s right, their job was to clear the ball and they didn’t do it.

You should seek therapy, with thoughts like you have.. Dr P is the best thing since sliced bread.

AS MUCH as Barnsley have improved under Valerien Ismael since his arrival in October, ruthless Swansea City gave them a reminder of how much work is still to be done if they are to continue rising up the Championship.

The promotion-chasing visitors were far from their best but still managed to inflict a 2-0 defeat on the Reds for the second time in just four weeks, mirroring their success at Liberty Stadium before Christmas.

Indeed, Barnsley had by far the better chances in the first half only to see Wales international Ben Cabango loop in a glancing header from Connor Roberts’ long throw in injury-time.

It was Swansea’s only chance of the half and it visibly left the hosts deflated.

Given Steve Cooper’s team have the meanest defence in the Championship - they have conceded just 13 goals in 25 games - perhaps the hosts knew they would be up against to retrieve the situation it even with another 45 minutes to go.

With that in mind, they could not gift their opponents anything else but they did just that at the start of the second period.

The in-form striker found himself running in free on goal and he did not disappoint, rifling a low right-footed shot past Jack Walton in the 55th minute for his seventh goal in as many games.

It was unfortunate for Anderson and Helik who, along with Michael Sollabauer at the back, had largely kept the Welsh club’s forwards in check.

It gave Swansea the breathing space they needed, however, and it was no surprise that Barnsley quickly introduced debutant Carlton Morris, the former Rotherham United striker bought from Norwich City for an undisclosed fee last week.

He could not find a breakthrough, though. Instead, Swansea’s Andrew Ayew felt he should have had a penalty when Romal Palmer seemed to catch him as he turned just inside the box in the 70th minute.

However, it was Swansea who were relieved soon after when Freddie Woodman produced a stunning save to deny an equally spectacular Callum Brittain drive from 30m out.

Still, at the other end, Walton was called upon to tip away a curling free-kick from the impressive Roberts and Barnsley were left pointless.

There had been few chances in the first half but, until Cabango’s goal, they had all gone to Barnsley.

Victor Adeboyejo had the first sight of goal when a slip in the Swansea defence allowed the Nigerian forward to send in a long-range effort that dipped just over the crossbar.

From Barnsley’s first corner, Conor Chaplin also fired in a well-struck effort but that was blocked by a mass of defenders in the box.

As the half wore on, with both sides often struggling to get the ball down and play any sort of football, Adeboyejo looked increasingly like the player who could make some sort of positive impact.

He weaved his way inside the penalty box with some intricate inter-play but could not find space to get his shot away.

The 23-year-old did find acres of space soon after but Callum Styles aimed a harmless shot at Swansea keepr Freddie Woodman rather than finding his unmarked team-mate.

Barnsley had to be ruthless. They weren’t. But Swansea - who did not use any substitutes and move to within a point of leaders Norwich City - showed them how to do it. 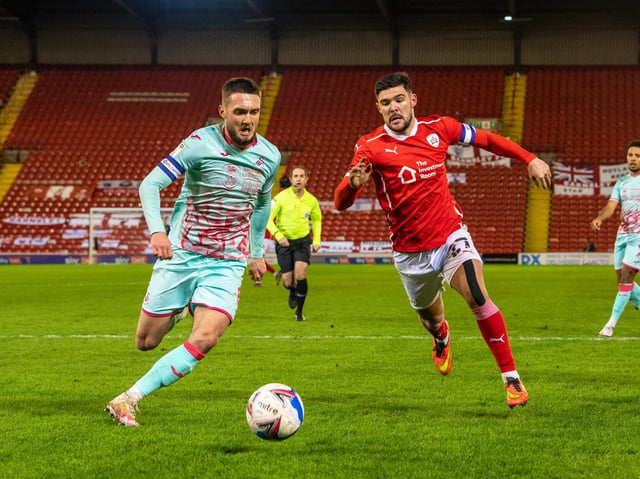 Far too early to talk about auto promotion yet. I think playoffs are fairly comfortable now though.

After the second goal we played better and looked like getting a third whilst our magnificent defence and gk stood firm not giving them a sniff apart from the fantastic strike which resulted in woodmans even better save.

Was a bit tough first half as Barnsley played to their strengths and stopped us playing, fair dos to them.

And we kept a clean sheet without bennett, would you put him straight back in after the back 3s fantastic performance? Tough choice for cooper.

This perfectly sums us up. We do what we need to win and the players take ownership on the pitch

Stupid is as stupid does.

STEVE COOPER | WE SHOWED WE CAN BATTLE AND WIN UGLY

Steve Cooper felt Swansea City underlined their willingness to win ugly when the situation requires as they beat Barnsley and remained in the automatic promotion places.

Goals from Ben Cabango and Jamal Lowe sealed the win at Oakwell; Cabango heading in a long throw from Connor Roberts on half-time, before Lowe capitalised on a defensive mistake after the interval.

It moves the Swans four points clear of third-placed Bournemouth, and stretched their unbeaten run to six games in all competitions.

There was also a 14th Championship clean sheet of the season to take back to South Wales alongside the three points, and the Swansea head coach praised his side’s application.

“A 2-0 scoreline away from home is always a brilliant result in this league,” he said.

“We had to work hard for it, it was not a pretty affair to observe at times but that is what it took.

“The pitch was difficult, it was windy, conditions were tough and Barnsley looked to put us on the back foot and were quite direct.

“You have to be able to deal with those things, otherwise you can get caught in your own half and jumped on.

“We showed a different side to us today, and credit to the lads because they did it really well.

“It probably wasn’t a pretty affair, but it was a fairly comfortable win.” 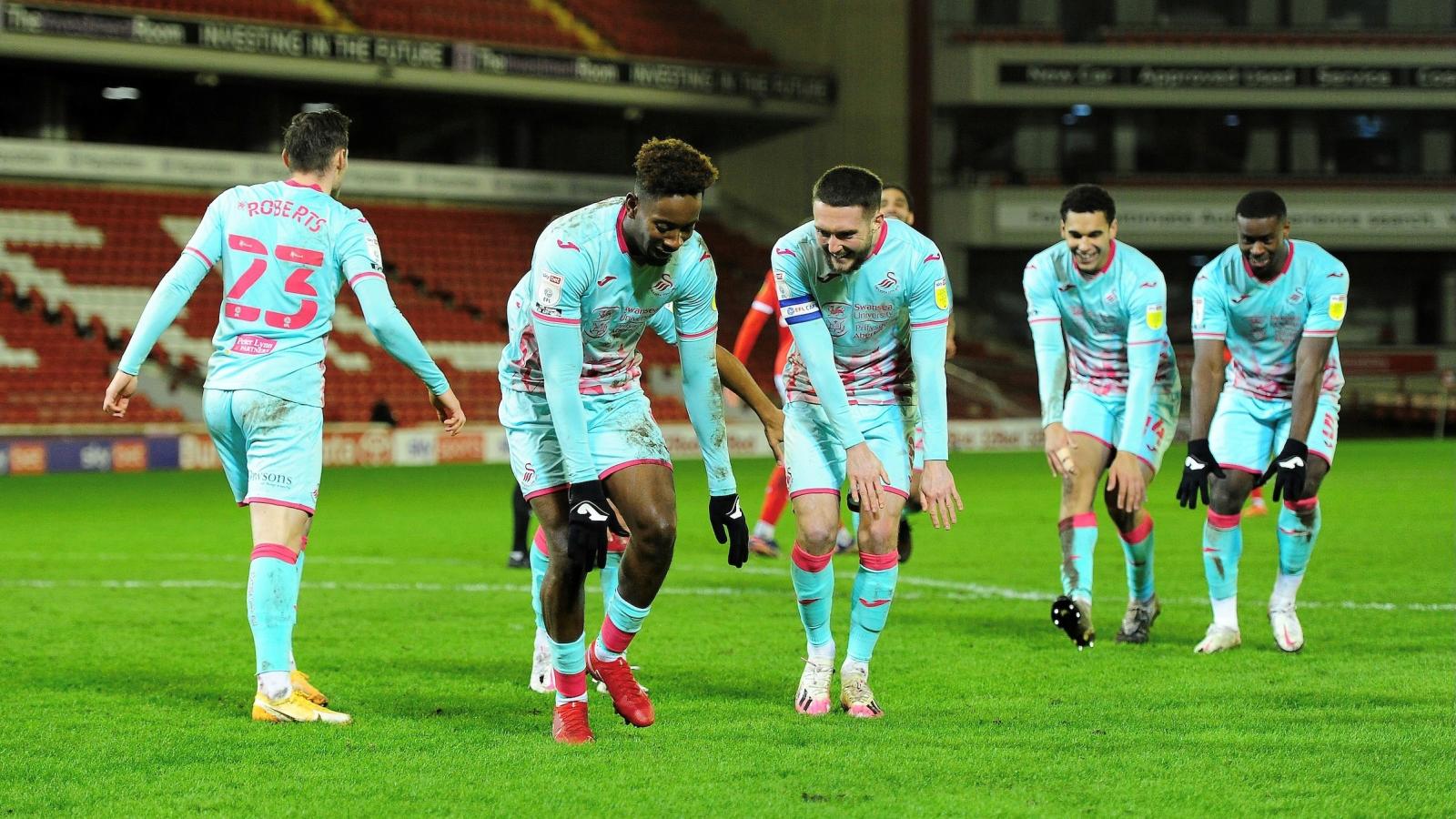