Socks? Thought he was a nylons man

Or possibly his bedroom curtains.

Curtains>FFS That is so 80s. 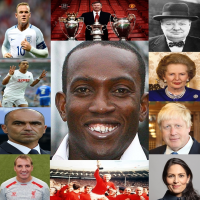 
What was wrong with what I said? It looked perfectly obvious that we were finding it easier to venture into their half when Gallagher was moved further back. It has been obvious to others as well, as I recall numerous commentators and pundits mentioning how Gallagher is playing further up the pitch for Swansea compared to his far more successful when at Charlton.

It's just one of many poor decisions made by our manager this season that have likely cost us better performances.


Totally naive comment, yet again. Gallagher came to Swansea with a view to doing a 'Lampard' driving forwards from a high lying midfield. Was one of the reasons for moving from Charlton as he became a fire-fighter during their plight.

For you to take yet another cheap shot at our manager on that basis says so so much about you.

Well if he came here with a view to play in a position that he is quite clearly less capable of delivering in than what he found great success with at Charlton, I seriously question his ambition as a footballer as he certainly won't find consistent game time in the Premier League with those sort of performances.

I think it's far more likely he came here because we were a better positioned team in the league, offered more stability than Charlton and one of his childhood friends joined at the same time.

I'm grateful for his time here as he was by far the most creative player we had during his time here. I seriously dread to think what our match day squad will look like next season.
Top

KrunchyKarrot wrote: ↑
29 Jul 2020 20:43
Get a grip FFS, Cabango has a hernia and VDH has a half or so in him. They are a good footballing team, first goal Gallagher sold himself second Grimes and VDH frucked up. Full backs need to tuck in we can score dont panic.

Lol... That's you talking shit as cabango just came on


Cabango's had a hernia problem since the early part of the year, and might need an operation now the season is over. It depends how it settles down over the next few weeks.
Everyday above ground ... Is a good day!

Badlands wrote: ↑
29 Jul 2020 22:12
We can talk all we like about missed penalties and missed opportunities at the Liberty but this game was lost 30 minutes before kick off -
A back line that has worked, looked efficient and positive broken up.
Add to that his decisions on subs / lack of and we have what we had all season ... a manager who should be shipped out.
While getting to the play off semi was an outstanding effort late on the league. has been there for us all season, this game should have been well within our capabilities.

The back line got broken as a result of Naughtons sending off at Forest.....so Cooper reverted to what he believed would be a stronger and more experienced one. VdH hadn't played all the post lockdown games so yes the backline from Bristol City Reading and 1st leg but Naughton had been a fixture before the red card
Top


Lol... That's you talking shit as cabango just came on


Cabango's had a hernia problem since the early part of the year, and might need an operation now the season is over. It depends how it settles down over the next few weeks.


Fair one I read it as cabango can't come on the pitch as had picked up a hernia injury only then to be brought onto the pitch.
Top

Pacemaker wrote: ↑
29 Jul 2020 21:59
I was not confident before these games, but I think the team overall gave their all, a pity the ball didn’t bounce our way in the second leg. But Brentford were the better side and deserved to go through. It got interesting at 3-2 and if we had got another who knows.

There was a bit of naivety on their first goal, where someone should have blocked their keeper, I don’t think MVDH has played well in either leg and to be honest I think he has had his eye on a move out for some time.

I have more faith in our younger players who are hard working and hungry for success.

People on here having a go at Grimes, Cooper, Dhanda etc I don’t understand it, they gave their best shot, Brentford are a really good side and Watkins was head and shoulders above everyone else on the field.

Looking forward to next season.

A good season, hopefully we can learn, improve and move on.

Sums it up for me,